It is considered a good governance practice for non-profits to limit board members to two successive terms before they must cycle off the board for at least a year or more. This keeps a board from becoming stale and injects fresh ideas into the organization. However, one of the downsides to this practice is you must lose board members that you would rather still have on the board.

This past week, I had the opportunity to recognize David Holcombe, co-Founder and CEO of the eLearning Guild and retiring LINGOs Board member in front of his “Guild family” at the Learning Solutions Conference in Orlando. David is finishing his second term on the board and will be leaving the LINGOs board after our next meeting. Needless to say, I hate to see him go.

It seems like only yesterday that I first met David and the Guild’s other co-founder, Heidi Fisk, at what was then called the Annual Member Gathering in Boston. I was so impressed with what they were doing to build a community among eLearning professionals that I knew I wanted David’s help with LINGOs which was simply a start-up operation at that time. David graciously agreed to help and after I “set the hook” I slowly began to reel him into more involvement with LINGOs – first as an advisor, then as a board member and ultimately as the Chairman of the Board. During that time, LINGOs grew from our first half dozen members to the over 75 international organizations that are currently members. Each year we not only expanded our membership but also the services we provided to them and to the sector at large.

David made it possible for each LINGOs member to have a premium membership in the Guild and with it access to the rich library of resources and events on technology-supported learning. I hesitate to point this out – but knowing David, I suspect he has already done the math – that benefit alone is worth over $125,000 each and every year.

The Guild has also been instrumental in supporting the Global Giveback program and since we began that effort, over 100 courses have been completed by volunteer developers. If you put even a nominal value – let’s say $5000 on each course, that is a “donation” worth over half a million dollars to LINGOs and our members.

And David has given unselfishly of his time and traveled at his own expense to LINGOs board meetings and events. In short, David has done everything reasonably or even unreasonably asked of him. 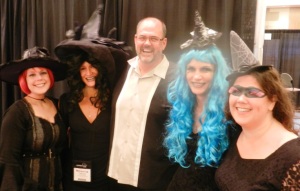 But, as I told the audience in Orlando, it hasn’t all been hard work. For example, this past fall at the DevLearn Conference in Las Vegas which happened to coincide with Halloween I snapped the picture bat left of David and the Witches of DevLearn. (I know they say “what happens in Vegas – stays in Vegas” but that is only if there isn’t photographic evidence) You might recognize the witches as Shannon of PATH, Catriona of Conservation International, Sam of Save the Children and Jenn of Ipas. I don’t think I have ever seen a larger smile on David’s face.

A Djembe Drum for David 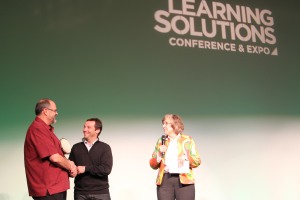 Over the years, David has assisted me with awarding djembe drums to Finalists and Winners of the Global Giveback Competition. David has always looked longingly at those drums and we even have had to pry his fingers off the drum he was awarding to participants. So we thought it would be a great way to acknowledge our gratitude for all he has done for LINGOs and presented David with a drum of his own. Alison Smith, Executive Director of InsideNGO and incoming board chairperson and Alfredo Leone joined me on stage to present David’s drum.

Alison acknowledged she had very big shoes to fill and if you aren’t aware, David is at least as tall as my six foot four inch height so she is quite right, both literally and figuratively. She also acknowledged that David’s entire team at the Guild from Heidi to all the rest of the staff made LINGOs members feel like part of the family and their support made it easier for David to be available to LINGOs.

In receiving the drum and with characteristically modesty, David praised the Guild members and Guild staff that have been so supportive and made it clear that despite leaving the board he still intends to support LINGOs and our members as he always has done and encouraged anyone interested to get involved in way that made sense for them.

We will miss David and I am personally grateful to him for his unselfish support of our members and his willingness to be available to me whenever I needed his counsel and experience. Hopefully, from time to time, David will tap on the drum LINGOs gave him and smile knowing how much he has helped enable.

View all posts by LINGOs